New Release: The Gorilla Guide® To... Storage and Applications in Kubernetes! 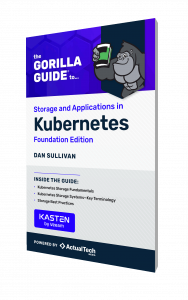 Kubernetes developers focus on their applications, but data is a crucial element of applications that requires a special focus of its own. An application can start and end in seconds (particularly in modern containerized environments such as Kubernetes), whereas you want data to be forever.

The distinction between data management and application management has been established for decades. Data was traditionally read and written by special applications—database engines such as Oracle—that managed the raw files containing the data. Databases were the province of specially trained database administrators who had little to with the applications. And application developers didn’t concern themselves with the behavior of the databases (until the administrator told them to fix a query that was lasting 20 minutes).

In The Gorilla Guide® To… Storage and Applications in Kubernetes, Foundation Edition, author Dan Sullivan explains the special considerations that apply to the data used in containerized Kubernetes applications. He introduces the Container Storage Interface (CSI) standard by which storage providers such as Amazon and Microsoft Azure offer a common interface to their data. He explains how an administrator can specify storage through the type of “volume” it occupies.

An ephemeral volume doesn’t sound like something you’d want for your data, but Sullivan shows many everyday types of data for which an ephemeral volume is just the ticket. Persistent volumes work like traditional datastores. There are also sophisticated ways to shared data through projected volumes and the network file system (NFS).

Kubernetes allows you to take snapshots of volumes (Figure 1), which are used for backups just as with more traditional data stores. Sullivan briefly covers a couple failure scenarios, which are similar to data losses in other types of systems. He also summarizes the Kasten K10 service, which provides robust and easily configurable backups. He ends with architectural and operational guidelines for data management.

Gorilla Guides make learning and discovery approachable and easy, and they take the guesswork out of navigating complicated IT technologies. Written by an industry expert and sponsored by Kasten by Veeam, this resource is packed full of trusted information on container storage.

Dan Sullivan is a principal engineer and architect focused on cloud architecture, data science, machine learning, and data architecture. He’s the author of six books, as well as several online courses, in addition to Google Cloud’s official certification study guides out from Sybex. Follow Dan on LinkedIn at  linkedin.com/in/dansullivanpdx/.

About Kasten by Veeam

Kasten by Veeam® is the leader in Kubernetes backup. Kasten K10 is a Cloud Native data management platform for Day 2 operations. It provides enterprise DevOps teams with backup/restore, disaster recovery and application mobility for Kubernetes applications. Kasten K10 features operational simplicity and integrates with relational and NoSQL databases, all major Kubernetes distributions, and runs in any cloud to maximize freedom of choice. Our customers are confident that their Kubernetes applications and data are protected and always available with the most easy-to-use, reliable and powerful Cloud Native data management platform in the industry. For more information, visit  www.kasten.io or follow @kastenhq on Twitter.